Vibrant, elegant, and multicultural, Australia’s second largest metropolis frequently tops the list of the world’s most liveable cities. With its tangle of hidden laneways, tree-lined promenades, and grand Victorian buildings funded by the 1850s Gold Rush, the city has a distinctly European feel. Foodies will also find plenty to love. Famous Aussie chefs flaunt their talents here, and you can feast on everything, from Greek, Italian, and Indian cuisine to Spanish and Vietnamese fare.

But perhaps Melbourne’s biggest claim to fame is sports. The famous Melbourne Cup horse race, held on the first Tuesday in November, brings the entire nation to a standstill, and Australian Rules football elicits an almost religious reverence here. Catch a game at the Melbourne Cricket Ground; explore the city’s diverse galleries, chic cafes, and shops; stroll through beautiful botanic gardens; cruise along the Yarra River; or hop aboard a heritage tram to discover Melbourne’s magic. On top of all these exciting things to do, rewarding day trip adventures lie a short drive from the city buzz. 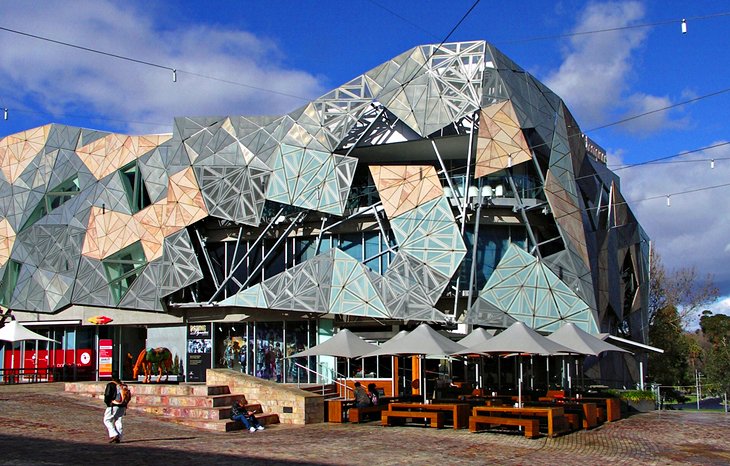 When Federation Square opened in 2002 to commemorate 100 years of federation, it divided Melburnians. There were those who loved it and those who hated it. Either way, it has become an integral part of the city and a great place for tourists to start their sightseeing. Located opposite Flinders Street Station, a major public transport hub, the building’s ultra-modern design of open and closed spaces contrasts with the surrounding Victorian architecture. With more than 2,000 events annually, you can always find entertainment in the central outdoor performance space and intimate indoor venues. Federation Square also houses the Ian Potter Centre: NGV Australia, dedicated to Australian art, and the Australian Centre for the Moving Image (ACMI). More commonly called “Fed Square,” it is also one of the largest free Wi-Fi sites in Australia. 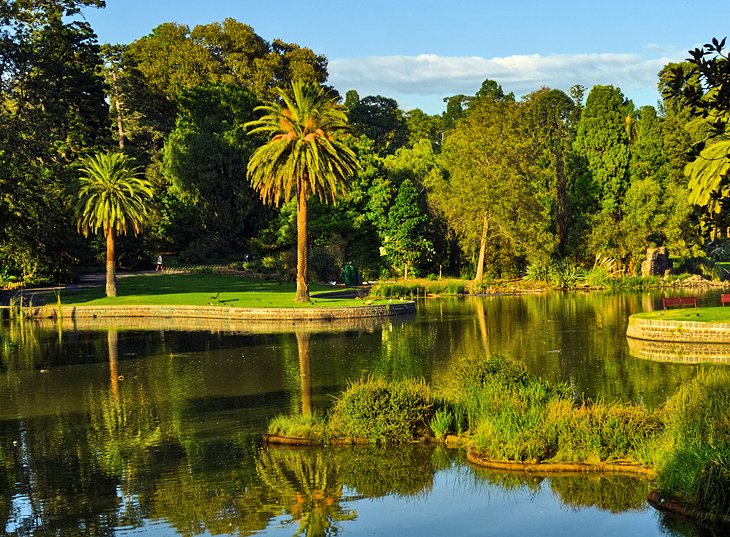 In the heart of green parkland extending south of the Yarra River, about two kilometers from the CBD, the Royal Botanic Gardens are among the finest of their kind in the world. Established in 1846, the gardens encompass two locations: Melbourne and Cranbourne. The Melbourne Gardens cover an area of 38 hectares with more than 8,500 species of plants, including many rare specimens. The Ian Potter Foundation Children’s Garden is designed to encourage the next generation of gardeners, and the Aboriginal Heritage Walk is a popular tour that looks into the rich heritage of indigenous Australians. Visiting the gardens is one of the best free things to do in Melbourne. In summer, live theater is a highlight of the gardens, and a moonlight cinema is set up under the stars. This is also a popular spot for a picnic by the lake or a traditional high tea at The Terrace cafe. 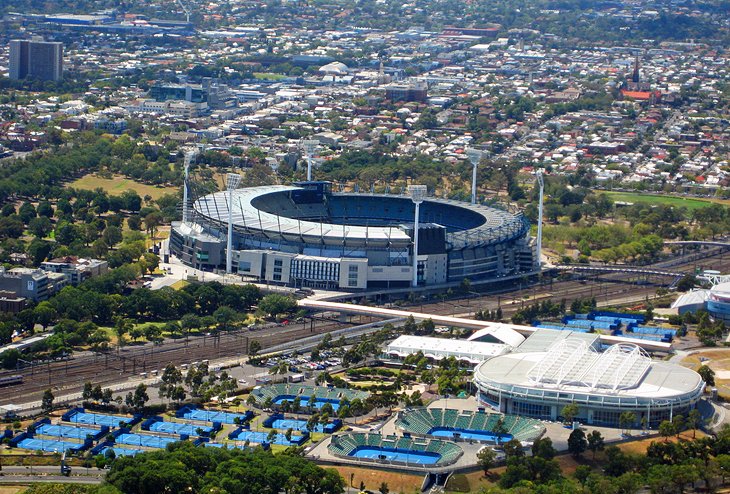 Melbourne is the sporting capital of Australia, so it’s no surprise that a sports stadium numbers among the city’s top tourist attractions. With a capacity of 100,000 and a history dating back to 1853, the MCG is considered one of the world’s greatest stadiums. As the main stadium for the 1956 Olympic Games and 2006 Commonwealth Games, the birthplace of Test Cricket, and the home of Australian Rules Football, “the ‘G” is woven into the fabric of Melbourne. Daily 75-minute tours take visitors for a trip down a memory lane of great moments in sporting history and incorporate the National Sports Museum, including the Australian Gallery of Sport and Olympic Museum. You can also catch a game of cricket in summer or football during winter.

Directly opposite the MCG is Melbourne Park, home of the Australian Open tennis tournament, held every January. You can hire a tennis court, and many concerts are held here during the year. On the banks of the Yarra River, a short stroll from Flinders Street Station, this area is packed with cultural attractions. Southbank promenade is filled with indoor/outdoor cafés, restaurants, and live entertainment. An excellent arts and crafts market is held every Sunday, and the area is also home to many festivals throughout the year. Easily recognizable by its spire, the Arts Centre incorporates a range of theaters and spaces, including the State Theatre, Playhouse, Fairfax Theatre, and Hamer Hall, the premier performance space for the revered Melbourne Symphony Orchestra.

The oldest public art gallery in Australia, the National Gallery of Victoria holds more than 70,000 works of art in two city locations. The international collection is housed in the St. Kilda Road building, originally opened in 1968 and extensively renovated in 2003. The building is renowned for The Great Hall, where visitors are encouraged to lie on the floor and gaze at the colorful stained glass ceiling. The extensive Australian collection is held in the Ian Potter Gallery in Federation Square, featuring the history of Australian art from Aboriginal works through to the Heidelberg School, and contemporary mixed media. One of the highlights is the large triptych format, The Pioneer by Frederick McCubbin.

Named in recognition of The Eureka Stockade, the 1854 rebellion of prospectors in the Victorian goldfields, the Eureka Tower stands 91 stories above ground in the heart of Southbank. The skyscraper’s gold crown and gold-plated windows add to the theme and literally sparkle when the sun catches the top of the building. Skydeck, on the 88th floor, affords the highest public view in any building in the Southern Hemisphere. Adding to the experience is The Edge, a glass cube that slides out three meters from the building for vertigo-free visitors.

Wandering the labyrinth of lanes and alleyways around Flinders, Collins, and Bourke Streets reveals elegant, interesting, and quirky Melbourne at its best. The jewel in the crown is the magnificent Block Arcade in Collins Street. With its mosaic floor, period details, and unique shops, this is the place where late 19th-century gentry promenaded, coining the phrase, “doing the block.” It’s worth lining up for a morning or afternoon tea at the Hopetoun Tearooms. This Melbourne icon dates back to 1892 and is the only original shop still in the arcade today. The opulent Royal Arcade is Melbourne’s oldest arcade, and Flinders and Degraves Lanes are also well worth exploring. Several companies run guided walking tours of the lanes and alleyways.

A short tram ride from the CBD, the Melbourne Museum is surrounded by beautiful gardens and parkland. This modern purpose-built museum houses a diverse collection depicting society and cultures. Highlights include Bunjilaka Aboriginal Cultural Centre; the Phar Lap exhibit, about Australia’s greatest racehorse; and the Children’s Gallery, a series of hands-on activities designed to stimulate and engage youngsters.

Adjacent to the Melbourne Museum is the elaborate Royal Exhibition Building. Built in 1880 to host Melbourne’s International Exhibition, the building also held the first Commonwealth Parliament of Australia in 1901. Regular tours are available, and the building is still used for exhibitions and special events.

Trams are a big part of Melbourne’s public transport system, and the City Circle Tram offers tourists a free and easy way of seeing the CBD. Accompanied by a commentary, the hop-on, hop-off heritage tram passes many of the grand historic buildings, including Parliament House, the Old Treasury Building, Princess Theatre, and the Windsor Hotel. The trams run every 12 minutes and take about 50 minutes to complete the entire loop.

Although the 22-hectare Melbourne Zoo dates back to 1862, the 320-plus species of animals have the best of modern facilities in state-of-the-art enclosures. The award-winning Trail of the Elephants is an insight into the lives of the resident Asian elephants in a traditional village-garden setting. Another highlight is the Orang-utan Sanctuary, where the animals live in their treetop home. With many wild encounters, including “roar and snore,” twilight music concerts, and behind-the-scene tours of some enclosures, Melbourne Zoo offers animal-lovers a fun-packed experience.

Captain Cook’s Cottage was brought to Melbourne from Captain James Cook’s native home in Yorkshire, England and erected in Fitzroy Gardens. The quaint cottage is an insight into the life and times of Cook’s seafaring adventures and exploration of Australia and other parts of the world.

Also in the beautiful Fitzroy Gardens is the magnificent Spanish-mission style conservatory that is always filled with a vibrant floral display. Children will love the tiny Tudor village and Fairy Tree.

A river boat cruise is not only the perfect way to see the sights, it’s also an insight into the history of the Yarra River. Many cruise companies can be found along Southbank, and it’s a relaxing and fun way to get your bearings before you set out to explore the city on foot. While you’re gliding down the river, keep an eye out for Birrarung Marr, originally called “Birrarung,” meaning “river of mists and shadows,” a waterfront parkland celebrating Aboriginal ties with the Yarra River. If you’re short on time, the one-hour River Gardens Melbourne Sightseeing Cruise gives you a relaxing tour past top city sights, like the Royal Botanic Gardens, Melbourne Cricket Ground, and National Tennis Centre.

Sitting majestically in Kings Domain gardens, the Shrine was built after the First World War to commemorate Victorians involved in the Great War, either abroad or at home. Today, it serves as a poignant reminder for all servicemen and women and is the central focus for ceremonies on ANZAC Day, held on 25 April, and Remembrance Day, held on 11 November each year. Guided or self-guided tours are available daily, and lighting on the building is particularly beautiful at night.

Docklands is Melbourne’s newest waterfront entertainment precinct. With the highest concentration of green-star rated buildings in the Southern Hemisphere, the satellite village is filled with cafés, restaurants, tourist attractions, and parklands. The view from the giant observation wheel, Melbourne Star, is spectacular, and the area is also home to Etihad Stadium; the Junior Wonderland amusement park; and the Icehouse, a world-class ice sports venue. An art and vintage market is also held along the waterfront every Sunday.

A popular place with locals and tourists, this historic icon has been at the center of fresh produce shopping since 1878. In addition to the magnificent food halls, market stalls sell everything from clothing, art, and toys to that hard-to-find unique souvenir, five days a week. Tours are available, and special events such as night markets, music concerts, and other functions are often held during summer.

Open to the public, even when parliament is in session, Parliament House is one of Melbourne’s best kept tourist secrets. It was built during the Gold Rush, and its interior is lavishly decorated with gold leaf, chandeliers, and a superb mosaic floor. Free, informative tours are held Monday to Friday on days when parliament is not in session.

Located in the elegant Old Customs House, the Immigration Museum tells real stories of people from all over the world who now call Melbourne home. The permanent collection is interactive and engaging, and special exhibitions add to the museum’s appeal. A visit here provides a different perspective of early European settlement, as every person arriving had to pass through customs here.

Popular listings around you How the Performing Arts Benefit Kids